Coordinator/Leader for the Transition Team

It is time for PWANZ (formerly APW) to share with the next generation its “taonga”, to provide support and to “hand the baton on”!

Presbyterian Women Aotearoa New Zealand (PWANZ) is seeking a Co ordinator to lead a team to focus on younger women to reach their full potential for leadership, networking and growing the Church.

Presbyterian Women recently agreed it was time to move forward, restructure and rebrand. The aim is to build capacity development of women in the Church. It wants to target those under 50 years; Pacific Island, Asian, migrant and rural women. PWANZ wants a structure created in which young women in the PCANZ may be empowered to be active in mission and ministry.

21st Century society is very different from those of the “Baby Boomers”. Today’s young women share many of the same passions e.g being acutely aware of the Spirit of God and strong advocates for social justice. However, they socialise differently and tend not to attend meetings but prefer to “meet” through social media or face to face over “a coffee”. These women are BUSY, juggling families, careers, some immersed in different cultures and church.

Presbyterian Women is right now establishing a Transition Team. Over the following ten months the team will consult with younger women as to how “in their way” the Church might engage with them to realise their full potential for leadership, networking and growth. The Transition Team will continue to fulfill its advocacy role of the United Nations Commission for the Status of Women and its role in (Overseas) Mission.

The Coordinator’s role is until September 2016 and is at present a voluntary one. We wish to have the team completed by Christmas. Is God putting this challenge to you ? If so, - then do request a Job Description now from Heather Tate hvtate@vodafone.co.nz

Plan to be there to have your input into the future of our movement.

The motions to be discussed are:

All PCANZ parishes with an affiliated PW group/s are entitled to one voting member. Individual members may also vote - only one vote per parish however. Registrations are due ASAP. Click here to download registration form. 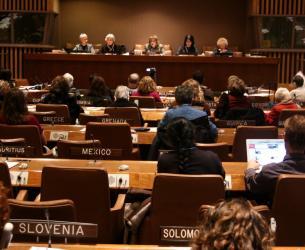