This page will be updated with news from the first day of Special Assembly 22 as it becomes available.

The Special Assembly that began today is the second online Assembly held by the Presbyterian Church. The first online Assembly was the shortened General Assembly held last year. The ongoing Covid-19 pandemic has seen the Church adapt, learn and upskill to create new ways to meet via online platforms. See images here from 'behind the scenes' at Hope Christchurch where the technical team is working hard; a huge effort has gone into holding the event electronically. Images below are of the 'top table' and the screens of Assembly Commissioners before them. 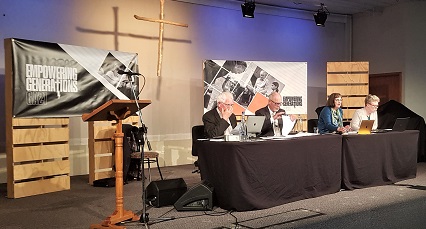 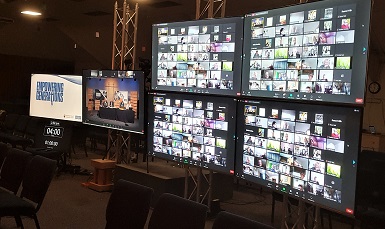 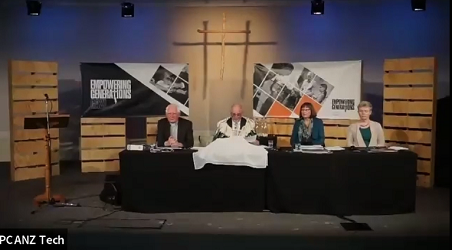 Last year, due to the online service, it was not possible to have the usual ceremony and service for installation of the Church's Moderator involving the transfer of a ceremonial cloak (Te Korowai Tapu) and the laying on of hands by past Moderators, before the gathered Commissioners of the Assembly. The installation is usually preceded by a powhiri.
So, in March this year, Moderator Right Rev Hamish Galloway and Very Rev Fakaofo Kaio gathered with Marina Rakuraku, Moderator of Te Aka Puaho who removed Te Korowai Tapu from Very Rev Fakaofo Kaio’s shoulders, and placed it over the shoulders of the Right Rev Hamish Galloway. Rev Tamiana Thrupp of Te Aka Puaho led a karakia.
Gifts were presented by Te Aka Puaho to previous Moderator, the Very Rev Fakaofo and to his lovely wife Mrs Ruth Kaio. 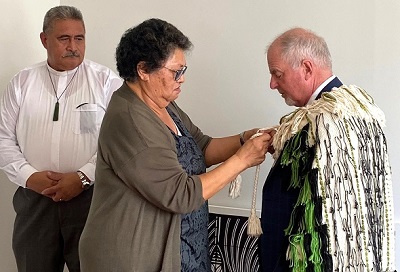 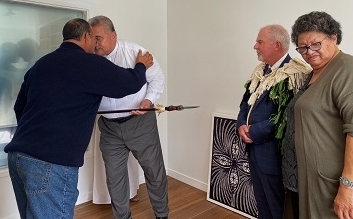 Download the PowerPoint slideshow of the transfer of Te Korowai Tapu played at the opening of the Special Assembly on 27 April 2022. The music is ”Korowai Tapu” by Rev Malcolm Gordon, from Songs for the Saints.

A number of Procedural Motions enabled SA22 business to proceed this afternoon.
The Assembly roll was accepted, as were reports and proposals printed in the Assembly reports - the working documents of the online Assembly.
Procedural motions were agreed without debate.
Standing orders were adopted with the deletions of the last lines of clauses 17 and 23. Leave was granted for changes to be made to recommendations, or to withdraw recommendations, as listed in Section C of the White Book.
Key positions that enabled the Assembly to proceed were ratified. Chris Wiltshire, Rev Marty Redhead and Brad Kelderman were appointed timekeepers, Rev Andrew Howley was appointed scrutineer and Rev Shona Bettany was appointed Deputy Clerk until the close of this meeting. The Facilitation Group under Standing Order 24 comprised the Revs Chris Elliott, Anne Stewart and David Coster.
Knox Church in Dunedin, St Albans in Christchurch and Nawton Church in Hamilton were granted leave to meet during the Special Assembly.
The Memorial Minute for the Rev Ned Ripley was placed on the records of the Assembly.
The following associates were recognised: Rev Alistair McBride, Ms Marina Robati-Mani (Assembly Business Work Group), Ms Marilyn Wallace, Rev Dr Kerry Enright (Book of Order Advisory Committee) and the Very Rev Richard Dawson.

Special Assembly today approved a clarification to Chapter 5 of the Book of Order, which seeks to remove any doubt about the rights of a congregation to have a say in how their property is treated during discussions about dissolution.
After a church council has applied to a presbytery to be dissolved, a second congregational meeting is held with a Commission of the presbytery. This meeting discusses the consequences of dissolution and it provides congregational members a chance to voice their concerns.
“Although it has been implicit in the existing provision that the hopes and concerns expressed by the congregation (wishing to dissolve) to the presbytery Commission include their hope and concerns about the property of the congregation, this amendment ensures that such views will be heard,” explains Marilyn Wallace, Acting Convenor of the Book of Order Advisory Committee.
Today’s amendment to section 5.9(2) to add: “including in relation to property” after “their concerns and hopes” is the result of questions and discussion at the General Assembly 2021. Proposals put forward then were withdrawn from further consideration.
The change has been adopted as an interim provision in place until the next General Assembly meets in 2023 and will be remitted to presbyteries and church councils.

Today the role of PressGo in sharing resources nationally, particularly through the administration of the Mission Enterprise Fund, was debated.
PressGo was established by the General Assembly in 2008 to play a role in the culture of generosity and sharing resources nationally. Since then it has made grants of $3.5m to 119 applicants, with sums ranging between $500 and $500,000 each. The Assembly was asked to affirm this continued role since there were those who felt PressGo’s national focus harked back to an era before larger presbyteries and thus was no longer necessary. However this was refuted. Many attendees spoke of the invaluable assistance PressGo had given their presbyteries in addition to the local support they had received
The motion that PressGo’s role in sharing resources nationally, particularly though the administration of the Mission Enterprise Fund, be affirmed was carried 138 to 8.

A motion that for the sake of greater clarity and shared understanding, a statement on the formula, fundamental doctrines and liberty of conviction, as set out in Appendix 1 to the DCG’s Assembly report be adopted was put to the Assembly.
All speakers spoke in favour of this motion which they hoped would dispel uncertainty and help enhance the Church's underlying unity and cohesion. One speaker suggested it was important to continue to be reminded of what had been agreed in the past.
The motion was carried 133 to 10 votes.
Leave was granted to withdraw the motion that the material on the Church website about Statements of Faith be revised, as set out in Appendix 2 to the Doctrine Core Group’s report, so as to align with Book of Order Regulation 1.1 (1-7).

Hate Speech
It was voted that leave be granted to introduce the motion that in relation to proposed ‘hate ‘speech’ legislation, it be resolved:
A) That in consistency with biblical teachings, this Church rejects all racism, extremism, hatred, toxic speech, incitements to hatred, and incitements to violence, and agrees that dangerous, threatening and hostile speech should be constrained by law.
B) That this Church is concerned for society’s foundational liberties of thought, religious belief and expression, as set forth in the New Zealand Bill of Rights and urges Parliament to ensure there are very clear definitions in the legislation distinguishing between truly dangerous hate speech and the general rights of all New Zealanders to hold and express diverse beliefs and opinions, even though any such beliefs and opinions may sometimes be seen as disagreeable or offensive by some.
C) That this resolution be communicated to the Prime Minister, Minister of Justice, Select Committee and other Members of Parliament.
The backdrop to this motion was the hate speech legislation that was to have been put to Parliament this year but has since been shelved. The purpose of the motion was to balance the competing demands for speech to be free of hate while at the same time safeguarding the basic liberties of freedom of expression. As one speaker explained that they are asking for the right of belief and opinion to be protected for everyone, including those opposed to the Christian faith.
The motion was carried 126 to 17.

Terms of Reference
The motion that the Terms of Reference of the Doctrine Core Group be amended by the addition of a new final sentence: “The Doctrine Core Group may bring to the attention of the Church or General Assembly public matters which have significant implications” was suspended pending an investigation into the terms of reference of the DCG. This would require checking the GA 2018 decision on this issue. It was hoped further clarification would be available tomorrow.

The Church’s Property Trustees have laid down a challenge that significant changes to the Church’s property portfolio need to be made – and soon.
“We are concerned that the Church’s properties are no longer fit for the purpose of supporting ministry in the 21st century,” says CPT Convenor Rev Andrew Souness.  “Too many of our properties are old, cold and uninviting. They are expensive to maintain and insure, earthquake-prone and single-use. Only a third of them have an acceptable earthquake rating.”
The Trustees hold titles with an estimated value of $1 billion and they also oversee capital proceeds from property sales, which make up nearly 40% of funds in the Presbyterian Investment Fund. Recent, exciting new builds show what is possible, says Andrew.
“These multipurpose buildings are a joy to be in and are easy to maintain. They’re inspiring.”
Assembly heard today that the Trustees believe change is possible, but progress so far has been slow and uncoordinated. The Church needs to act more collectively and more strategically.
What that means in practice is that presbyteries, the Church Property Trustees, and the Synod of Otago and Southland and its joint Property Working Group, are now invited to work together to devise a plan that enables over time fit-for-purpose buildings. ‘Fit-for-purpose’ includes attention to the energy and waste efficiency of buildings with the aim of reducing environmental impacts as much as possible. An amendment to include the word accessibility was lost.
The Trustees will then report back to GA 2023 with the plan and an assessment of what it will take to achieve it. They will also provide an update on compliance with the amended earthquake policy timetable. All parishes have until June 2022 to complete their seismic assessments, and some will have to repeat the assessment process as a result of recent changes in engineering standards.

Originally prepared for GA21 but still current, Commissioners and Observers were treated after an afternoon of business to a video presentation on the work of the Presbyterian Youth Ministry (PYM). The video is also available on the Church Vimeo channel so please share it with your parish - watch or share it here.