A brief commentary on the regulations about elders leading communion.

The Session or Parish Council fixes the times of public worship, authorises and regulates the observance of the sacraments, and appoints special times for humiliation or thanksgiving or prayer.

Here are the essential aspects of the Church's provision for administration of communion by elders: it remains the norm that the minister administers communion

(B) The Act of Modification (Clause l)

[ The full Text of the Act of Modification is in Appendix B-4 of the Book of Order. Clauses 2-4 are included below.]

1. The Session or Parish Council fixes the times of public worship, authorises and regulates the observance of the sacraments and appoints special times for humiliation or thanksgiving or prayer.
The Sacrament of the Lord's Supper is normally administered by ordained ministers except where, at the discretion of the Presbytery or Union District Council, certain elders may be authorised so to do but always under the authority of the minister or interim moderator and of Session or Parish Council...

The 1993 General Assembly adopted the following interpretative statement for inclusion in the Book of Order (1993, pp.149-150) 'as a guide to understanding the scope and intent of the Act of Modification, which remains the primary and definitive legislation':

The key words, in both the Act and the interpretative statement, are 'at the discretion of Presbytery'.

The statement is intended to preclude misunderstandings (in either direction) of the Act's scope and intent-to discourage both an unduly restrictive model and an unduly permissive model.

A parish must make a reasoned and responsible request. A Presbytery should take seriously the good judgement and local sensitivity of the Session, but in all cases retains full discretion.

Presbyteries need to be sure that nominated elders really do have the personal qualities and attitudes listed in 4(a)-(e) (Appendix E5 of the 1993 Book of Order, p.164), training and authorising such elders with care, and monitoring their service thereafter. Presbyteries must insist that the regulations (1-12) are followed, and must be prepared to respond to any abuses that might develop. For example, a Presbytery may withdraw authorisation from any elder who initiates communion services independently of either the minister or Session.

2. Assembly affirms the reformed understanding of the essential relationship between Word and Sacrament, and the need for Communion to be administered with understanding in the context of the preached Word.

The Lord's Supper is not a magical rite, with its own inherent power that makes it effective simply by being performed. The Lord's Supper may not be administered in isolation from the reading and preaching of the Word of God in the scriptures. It can only achieve its purpose of nurturing our faith in Christ when it is received in association with the proclamation of Christ. It is not essential, of course, that the same person both preaches the word and administers communion in any one communion service.

3. Assembly affirms the biblical principle of the Lord's Supper being administered decently and in order.

In 1 Corinthians 11:17-23, the apostle describes the disorder that had developed in the church at Corinth, then outlines a few essential principles (the phrase 'decently and in order' is borrowed from the last verse of chapter 14).

4. Assembly affirms that the true significance of the Lord's Supper depends upon the work of the Holy Spirit and the command and promise of Christ.

The basic point of this affirmation is that the effectiveness of a communion service is not dependent upon whoever it is that administers it. If there is to be spiritual benefit, then the work of the Spirit in giving us understanding and faith in Christ is essential.

(E) The selection, training and authorisation of elders to administer the Sacrament of Holy Communion, and the roles of Presbytery/Union District Council and Session/Parish Council.

158: In every celebration of the Lord's Supper bread and wine shall be set apart, with the unfailing use of Christ's words and acts of institution with thanksgiving, and there shall be communion using both bread and wine by presbyter and people. Any consecrated bread and wine remaining after the Communion of the people shall be disposed of in a reverent manner.

159: The service of Holy Communion shall normally include:

In cases where the Moderator is an elder, the Presbytery or higher court may, if it so desires, authorise such an elder to administer communion during the tenure of office, and shall ensure that such a moderator receives assistance and training as required.

(Note: The 1993 Assembly resolution also made provision for a 'higher court' to make the same authorisation.)

This regulation makes provision for authorisation of lay moderators to lead communion, but does not make it mandatory. The words 'may if it so desires' indicate that the discretionary power remains with the Presbytery or higher court.

The narrow context provided for in this regulation is only that of the worship life of a Presbytery, Synod, or Assembly, or-conceivably-a formal moderatorial service in some parish setting. It is not authorisation generally, but only in the context of moderatorial duties. It is authorisation only for 'during the tenure of office'. If such a lay moderator is later to lead communion in the normal context of a parish, all the due processes of nomination, training, and authorisation must be observed, as with any other authorised elder.

The provision for lay moderators to lead Presbytery or Assembly communion services has nothing to do with necessity. It is rather a different application of the basic principle, affirmed by successive Assemblies, that there is no valid theological or biblical basis for prohibiting lay administration of communion. In 1988, it was reported to Assembly that the basic biblical pattern of celebrating communion was that the natural leader of the community or gathering would normally preside. In a Presbytery or Assembly the natural leader of the community is the moderator.

It must be emphasised that in no case should the leadership of communion ever be seen as a mark of special status or privilege. It is, to quote another section of the regulations (E4(d), above), always but a 'servant role', to be exercised 'in humility'. In giving permission for a lay moderator to administer communion, a higher court is not conferring an honour, but rather expressing trust, and freeing their chosen leader to make a contribution in all aspects of their corporate life of worship, fellowship, and business. 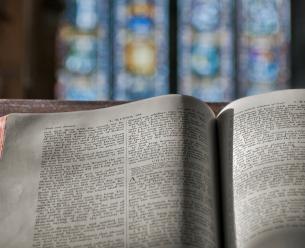